Friends, I've been skirting the outer rings of domestic appliance hell all last month. Our trusty JennAir fridge has been threatening me with constant clacking noises. It just hit it's 12th year mark, ominously hitting the average life span of a refrigerator.  Was fixing or replacement the better option given newer fridges promise greater energy efficiency.  Given how much frozen seafood we have squirreled away and refrigerator delivery times being a month away, I almost buckled under the stress envisioning the highly probable demise of our current fridge.

I don't have exact separate energy data for fridge use but I do know the fridge is pretty much the only thing running during midnight to 8am in the morning. From the yearly usage data(in kilowatt hours) from PG&E, I culled the data to the early morning hours as a rough gauge.  Besides python to clean and cull the data, I just used Google Sheets for charting. I should have culled the hours more as I sleep 2 am most nights running laundry and such. But still, the data is clear that we're leaking money.

Yikes!!!  Our fridge has been progressively getting less and less efficient over the years to the point that it's almost twice as inefficient draining our coins as much as $200 a year.  As much as I would just like to get a new fridge, it is not a simple matter given current supply chain conditions.  It's not availability as much as quality and reliability especially with the compressors.  Except for the small top down fridges, there are no solid reliable fridges, just tolerable ones, bad ones, and worse ones. Consumer Reports shows me scores of 80-60 for those that match our criteria. After reading every horror story for our potential fridge candidates, I vow we must make a last ditch effort to revive our fridge. 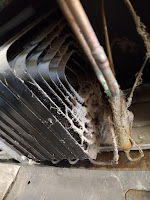 First, we clean out dust bunnies from the coil. To our shame we have never done so in 12 years.  We give the fridge a little more clearance for airflow.  The energy usage is reduced slightly by 20 to 30 watts, but the clacking has intensified. And to my horror, the fridge has started to get too warm(50F) in parts as the defrost appears to broken. We melt a gallon of frost build up and my husband replaces the defrost coil. Days later we see this appears not to be the root cause as clacking noise once again returns.

I order a 3rd party defrost control board for $26 from Amazon.  It has that funny distinct fridge smell and looks kind of used.   After my husband watches a youtube video, he does the replacement. After a few days, the electricity usage definitely stabilizes to something much lower, to ~0.14 kWh in the wee hours instead of the usual ~0.2+kWh. It's not the original efficiency from a decade ago but I will take this as a positive sign. It would have been so wasteful to throw this fridge away, think of all  energy required to make the steel for this refrigerator along with all the environmentally unfriendly foam that insulates this box.

We probably have bought a few more years before being forced to decide on a new fridge. I will get the most non-smart GE that I can. There is a disturbing trend of putting in unnecessary intelligence into fridges with LG and Samsung being the worst perpetrators.  But  it's really the compressor that needs to be rock solid. Given the high failure rates of LG's linear compressor and the class action lawsuit, I unfortunately will not buy an LG until there is significant redesign and data to suggest otherwise.  Also available technicians that can service the brand is a big deciding factor.

Friends, after the drudgery of appliance talk, what you need is some dancing to perk you right back up.