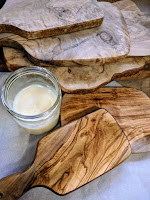 TLDR- Double boil beeswax(15%)/mineral oil in  a glass jar and mix with wood chopsticks for minimal cleanup.  Put jar directly on a scale to measure.

Normally I've been using straight up mineral oil to condition my wooden chopping boards but I've been curious about the addition of beeswax that supposedly creates a better seal. It's not clear to me if it's better to use pure mineral oil for the initial application for better absorption, then add this paste as a final step so I will have to experiment with my many boards.

I've tried various edible oils in the past (walnut/olive oil which was actually recommended by the original olive wood board manufacturer Arte Legno) to avoid such petrochemical by-products, but they have all gone rancid. I'm too much of a cheapass to buy fractionated coconut oil. So I've given up and reverted back to medical mineral oil.

Making this paste is not too complicated, you just double boil beeswax and mineral oil together to create a smooth paste.  I had some vintage beeswax a friend bought decades ago for doing encaustic. The beeswax had a whitish surface called bloom which is considered harmless. A cautious sniff confirms it's definitely not mold.
Taking off a small amount of wax probably was the messiest part. I could have heated up my knife but I didn't.  I initially tried to flake things off so it would melt faster but it's totally unnecessary and small chunks are just fine.  Doing this on parchment paper allows you to fold the paper and dump the contents into the mixing jar.


I saw a lot of youtube videos, some melt the beeswax first, others the mineral oil, some mix together.  The concept seems simple enough as all you're trying to do is an even mix without burning, but none of them showed the cleanup process and how to take care of mixing bowls and such.  So I decided I would just melt the ingredients in the final glass jar directly in a boiling pot so I wouldn't have to clean up any intermediate bowls. I just put the glass jar on a scale, added the beeswax, then poured in as much mineral oil to fill up the 85%.  If you mix in the jar, also you know exactly how much you are getting and won't waste anything. Also use a large enough jar to fit your hand, otherwise you can use a disposable spoon.

I just used an old pot I don't care about ruining to boil the water but the entire process was mess free enough that I didn't have to worry.
Also use disposable chopsticks to stir so there's very little to clean. I unnecessarily mixed constantly. I probably could have just put it on low heat for about a few minutes and done some final mixing. 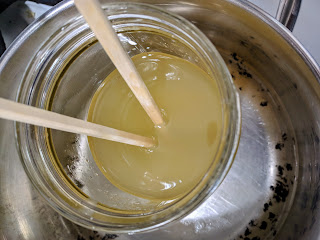 You can let it cool or apply it wet and warm.

I used a nitrile glove to apply the paste as I wanted to write this blog post without oily smudges on my keyboard.  I looked up that nitrile is non-reactive with mineral oil but it's important to make sure your glove is truly 100% quality nitrile and test.

Email ThisBlogThis!Share to TwitterShare to FacebookShare to Pinterest
Labels: wood